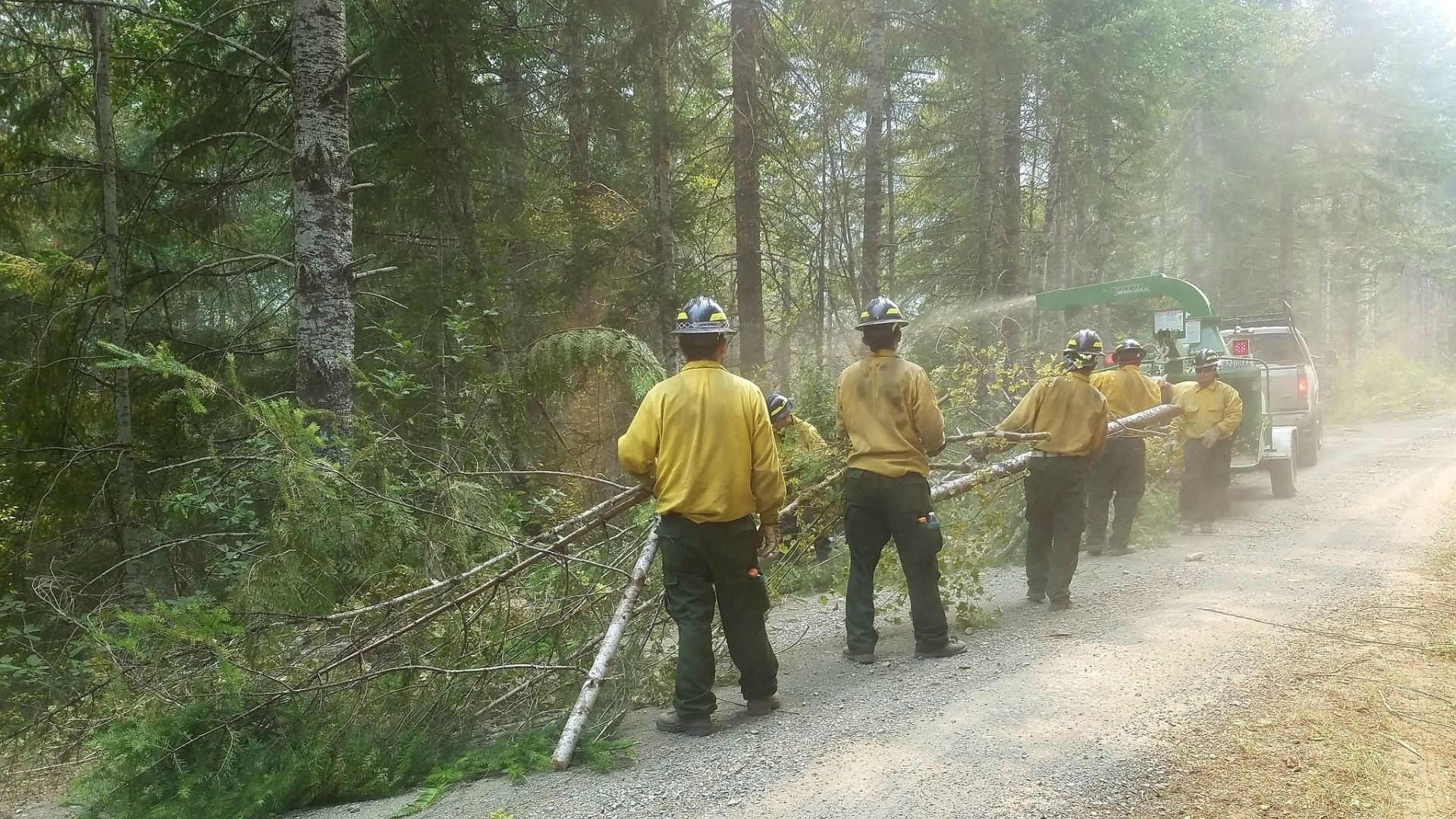 Before it was extinguished, the flames scorched 3,300 acres of land and destroyed dozens of valuable bigleaf maple trees. It was labeled the Maple Fire.

During the investigation of the cause of the fire, investigators found evidence of oversized stumps with sawed-off limbs which signaled that the flames could have been the result of a tree heist.

The investigation led to two men who not only stole trees from public lands but also started the massive fire burn that devastated the region. The story is detailed below.

Before getting into the details, it is good to think about how brazen it is when people steal trees from public lands. It is not only a felony, but they are stealing 60-100 years of growth and beauty that will take beyond our lifetime to replace.

The first twist in this case is that carelessness on the part of the thieves ultimately triggered a massive wildfire which destroyed thousands of acres of forest and created a trail that led to their arrest. Timber thieves often get overconfident and will leave clues that can be found by observant foresters, police, and landowners.

The second interesting twist in this case is that the two men responsible were proved guilty in court by the introduction of tree genetics. This is one of the first such cases where prosecutors used tree DNA to prove remains found in the wake of the wildfire matched that of the timber the men sold to local mills.

His partner, Shawn Edward Williams was charged with multiple felonies related to the scheme in September 2019. Williams pleaded guilty in December 2019 (just three months after the arrest) to stealing the trees. He was sentenced to 30 months in prison. He maintains he stole the trees but did not start the wildfire.

“Tree poaching is a growing issue in the Pacific Northwest. Thieves have consistently targeted public lands and national forests in Washington, California and Oregon, High Country News reported in 2017. Tree poaching costs the U.S. Forest Service as much as $100 million each year, and western Washington is one of the most affected regions.

As a result, police, federal investigators and the public have been on the lookout for those who are brazen enough to steal from public lands.

Because of the increased vigilance and attention to timber theft, Justin Andrew Wilke and Shawn Edward Williams decided to do their scouting work at night. From April to August of 2018, they walked the forest and used an ax to peel back the bark and check out the patterned wood underneath.

They targeted maple trees with patterned wood. These highly prized trees can be worth hundreds if not thousands of dollars. Patterned wood is valued among woodworkers and makers of musical instruments, such as guitars and violins.

Once the trees they wanted to poach were identified, they then returned later to fell the trees into smaller rounds or blocks, which they took to a private property nearby. They would then forge paperwork showing they harvested the trees from private property and sell it to a local mill who had no idea the wood was stolen from the national forest.

Timber theft cases are generally hard to prosecute, but this one was the first to add the element of tree DNA to the prosecution’s case. During the six-day trial, prosecutors provided evidence from Richard Cronn, a research geneticist for the Agriculture Department’s Forest Service, who verified that the lumber sold was a genetic match to the tree stumps in the Olympic National Forest.

The strategy worked. “The DNA analysis was so precise that it found the probability of the match being coincidental was approximately one in one undecillion” (one followed by 36 zeros), prosecutors said.

But what about the wildfire? How does their effort to steal trees lead to additional charges for starting a wildfire? This is a great example of how over-confidence and a resulting carelessness generally is the element that red flags fraud and leads to discovery and arrest. Thieves often slip up somehow and will be caught if landowners, foresters, employees, etc. are paying attention.

The two men had been harvesting these targeted maple trees for several months without being noticed. Apparently, on August 2, 2018, however, Wilke, Williams and two other unnamed men set up camp near the eastern edge of the forest and embarked on a quest to find a bigleaf maple that would be a good target for sale. They found one, but while preparing to chop it down, they noticed a bee next near its base. Instead of giving up, they decided to try to kill the bees.

After trying to remove the bees with wasp killer without success, they decided to burn the bees out. Wilke doused the area with gasoline and lit it. The fire quickly grew out of control as they were not able to extinguish the flames with their water bottles.

First responders arrived on the morning of August 4. By that time, the fire was 30 feet wide and expanding. Once the flames engulfed a 90-foot-tall bigleaf maple, the flaming tree showered embers on the surrounding foliage and soon the blaze covered three acres.

This was the #maplefire burning along a beautiful stretch of the Hamma Hamma River on Wednesday. The fire has grown to 1,396 acres and is 52% contained. pic.twitter.com/f58wcfL865

This particular wildfire, called the Maple Fire, burned for at least four days before it was controlled.

The area continued to smolder until raid put it out, but the area continued to be declared unsafe until May – nine months later. In the end, the forest fire grew to damage approximately 3,300 acres of public land in and round Olympic National Forest. The incident is estimated to have cost about $4.5 million before the fire was contained.

It is still unclear how investigators connected Wilke and Williams to the Maple Fire. When questioned by authorities, they apparently lied about timber poaching and even claimed they didn’t know about the fire.

Justin Andrew Wilke and Shawn Edward Williams were charged with multiple felonies in the theft and trafficking of illegally reaped timber.

This summary of events was taken from the following sources: