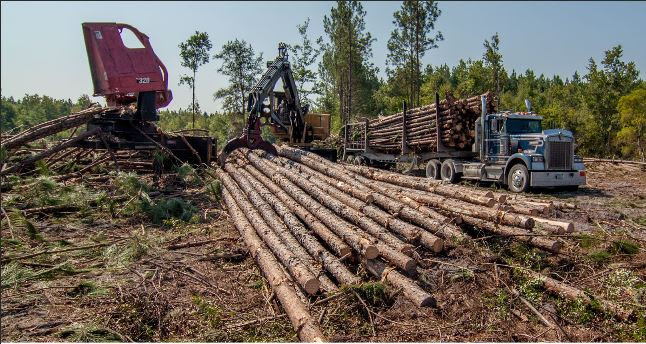 You may remember I asked for feedback for last month’s newsletter on zone jumping fraud. It’s clear I need to update the term, as many of you let me know, that zones aren’t used in your area and others couldn’t believe the comments I quoted from a few foresters. I can assure you the attitudes reflected by their comments are accurate for some folks in our industry. Other comments were well thought out and very passionate. I appreciate the feedback and am always open to suggestions!

As fuel prices have increased dramatically over the past two years the fuel utilized to operate woods equipment has become a target for thieves. A small logging job consisting of a skidder, a feller buncher, a loader and one portable fuel drum could easily have 750 gallons of fuel in the woods. At $5.13 per gallon that raises the potential loss to over $3800 for the fuel alone, without considering potential damage and downtime.

A logger returning to the logging job one morning discovered his log loader out of fuel. Upon closer inspection, it was discovered that someone had cut the fuel line and drained the fuel from the tank. Apparently, the thief did not have the capacity to handle all of the fuel in the tank and drove off, letting the rest of the fuel drain onto the ground

This theft cost the logger down time for repairs to the fuel line, the value of the fuel stolen and additional costs in the clean-up and disposal of contaminated soil.

The logger notified local law enforcement, but there was little that could be done to find the thieves or recover the costs from the damage. Taking the advice of local law enforcement officers, the logger installed motion-activated cameras in an attempt to monitor traffic into the job site. In addition, gates were closed during off hours in an attempt to prevent further access to the site.

Loggers routinely operate in remote locations that are difficult to monitor, giving potential thieves the perception that the theft is low risk. Loggers should work to change that perception.

It is recommended that organizations with exposure to the risks of fuel theft develop a security plan which implements daily defense measures using some or all of the recommendations below.

Block vehicle access and prevent driving to within close proximity of equipment. Use gates when possible, or use barriers of cut trees to block roads.

In the case of a fuel trailer, consider pulling it out of the woods during off hours. If that is not feasible, then remove the pumping mechanism and secure the trailer to a stationary object.

Maintain a record of all the gallons pumped from the tank. This will not only provide an accurate record of fuel usage by equipment/individuals, but it will also serve as a record that can be utilized by law enforcement and insurance companies should a theft occur.

To prevent siphoning of fuel, install an anti-siphon screen in the neck of each tank. This prevents hoses from being inserted into the tank.

To prevent fuel lines from being cut, harden the target by limiting access to the engine compartments when possible. If that is not an option, replace the existing fuel lines with steel braided fuel lines.

When possible, leave equipment near the homes of friendly neighbors who are willing to observe the machine periodically. And avoid parking two or three machines together in one place.

Install surveillance cameras to record all visitors to the site and post signs at the entrance to the job stating that the premises are under surveillance.

In areas known to be “trouble spots” consider hiring a local person to patrol the area at night (preferably a retired or off-duty law enforcement officer).

Camp out on the site.

Have signs printed, stating that the area is under surveillance by “XYZ Security Services” and post signs in obvious areas. (buy cheap signs, since they will be stolen or vandalized!).

Notify the local sheriffs office, since they may be able to patrol the area more often if they know to expect trouble. They may even use the situation to increase surveillance, hoping to catch a habitual offender in the act of committing a crime.